So I had this lovely acorn squash given to me a couple of weeks back from Matt's cousin and decided to make soup with it!
Hard to believe it's November already, lol. So here is a very simplified thrown together recipe that can easily be amended to personal preferences and tastes.

So the first hurdle was how to get it cut up. With some physical limitations due to arthritis and old age in general, I went at it with tools!

A butcher knife and hammer did the trick! I scooped out the seed cavity with a melon ball scoop. I did not peel the fruit but place all the pieces in the pressure cooker along with a cup of water and cooked for 15 mins default time. Of course, instead of water, you could use different broths to add more flavor such as chicken or vegetable broth. But, because it was cooked in water with no additional flavors, the squash can easily be used in any recipe calling for cooked squash or pumpkin. Squash pie anyone? Sunday muffins with cranberries maybe? Yum! And, of course, it would freeze fine for later uses.

I like to add a spoonful to my dog's food for some added flavor, fiber and vitamins. As I was packing away the extra squash today, the "girls" were in the kitchen with me, so I threw in a heaping spoonful into their dishes. They goobled it down like it was candy! lol 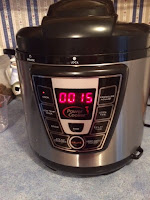 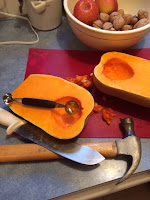 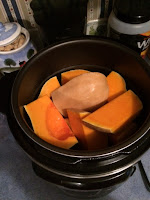 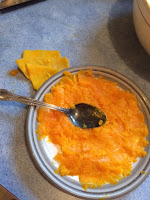 For an individual testing bowl, I took out three pieces of fork tender, melt in your mouth squash and "peeled" off the rind with a tablespoon. So much easier and no waste of edible squash this way. Mashed up the squash with the back of the spoon. You could probably get a more smoother blend with a stick blender but I like it with some texture to it.

I added the following enhancements:
No pumpkin spice in my cupboard, so a dash each of cinnamon, nutmeg, and ginger.
A dash of salt.
A dash of Italian herbs blend to give it a savory tone.
Few drops of maple syrup to bring out the natural sweetness of the fruit and spices.
My "milk" of choice is almond milk but any liquid you want to make it soup like consistency.

Heat to desire eating temperature in the microwave or stovetop, and the final touch was a dollop of plain yogurt. I wasn't too sure about the addition of the yogurt, but it was fine.

And there you have it, a basic squash soup that can be cooked up and served in less than a hour thanks to the use of the pressure cooker. Any kind of squash will do, probably canned pumpkin would be even faster! My version is bare bones so let your imagination run rampant and make it your own!

Enjoy the holidays!
Joyce
Posted by Joyce Moore at 9:36 AM

Hello!
Thank you for viewing my blog. I hope you find it interesting. You just never know what the subject matter will be!
You can find me on Twitter too.